The man, Brandon Soules, was arrested last week on a charge of false reporting to law enforcement, police in Coolidge, Arizona, said in a statement that outlined a scheme they believe was intended to get Soules excused from his job at a tire store.

In the statement, police said that Soules, 19, admitted during an interview with detectives that he had made up the kidnapping story, which led to his arrest. He was booked at the Coolidge Police Department and released with a court date. Soules did not immediately respond to a message Tuesday, and it was not clear whether he had a lawyer.

Police said their investigation began about 5:25 p.m. Feb. 10, when officers responded to call about an injured man in an area near train tracks, houses and a city water tower in Coolidge, a city of about 13,000 people about 55 miles outside Phoenix. The caller reported that the man was going in and out of consciousness.

When the officers arrived, they found a man, later identified as Soules, with his hands bound behind his back by a belt and a purple bandanna “stuffed in his mouth,” according to police. A photo from the Police Department showed the man with his hands tied while lying on his side on the ground.

Soules told officers that after completing an errand that morning, he returned to his home, where two masked men abducted him near his vehicle, struck him in the back of his head and knocked him unconscious, according to the arrest report. 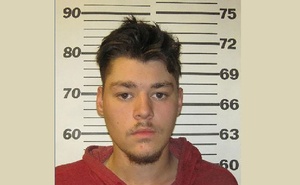 The men, according to Soules, “drove him around in a vehicle before they left him in the area where he was found,” police said. Soules was taken to a hospital, where he was evaluated and interviewed by police. According to the department, he told investigators that he had been kidnapped because his father had a large amount of money hidden throughout the desert.

For days, detectives tried to investigate his account including by reviewing surveillance video of the area and interviewing people he mentioned. Hospital records showed that Soules had no concussion or injury to his head, a police report said, and text messages reviewed by the detectives did not show messages or phone calls that had been described.

Eventually, and after repeatedly confronting Soules with problems in his account, the detectives concluded that “his story was fabricated and no kidnapping or assault occurred,” police said. They also determined that the account of hidden treasure was false.

Soules worked at a car shop, the Tire Factory, where he installed tires and drove around the area to pick up parts for the store, police said. A manager for the store declined to comment on the arrest Tuesday. According to Soules’ Facebook profile, he no longer works there.