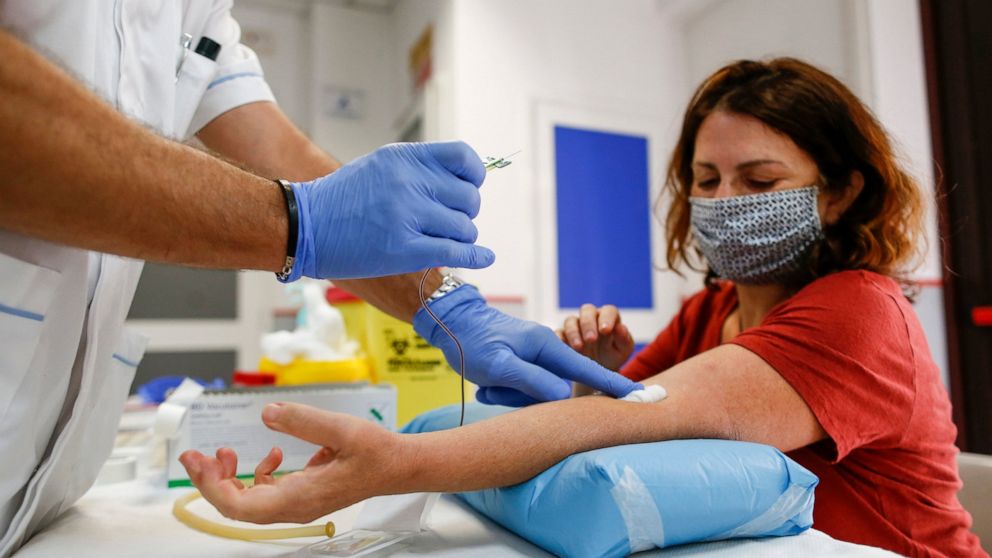 PARIS — New daily coronavirus cases in France have tipped above 7,000 for the second time in five days. The daily count adds weight to French authorities’ worries about the virus spreading further as the nation’s schools reopened their doors on Tuesday and numerous businesses were following suit.

The figures remain well under those at the peak of the pandemic that forced France into a strict two-month lockdown until mid-May.

Paris joined with some other cities in requiring everyone to wear masks outdoors and now also is requiring masks be worn in work places.

New cases began climbing again in France with the summer holidays. The coronavirus has killed more than 30,600 people in France.

HERE’S WHAT YOU NEED TO KNOW ABOUT THE VIRUS OUTBREAK

— Health departments say they lack the staff, money and tools to distribute, administer and track millions of vaccines, most of which will require two doses, when a vaccine becomes available.

— The U. S. federal budget deficit is projected to hit a record $ 3.3 trillion due to COVID-19 costs and the recession.

HERE’S WHAT ELSE IS HAPPENING:

TEMPE, Ariz. — Arizona State University says some students living on the college campus will be moved to other residence halls for social distancing because of an increase in coronavirus cases.

The university says it wants to reduce the density in the dorms. There are 5,000 spaces available in the residence halls to begin shifting students housing arrangements, officials say.

The seven-day rolling average of statewide cases dropped from 883 on Aug. 18 to 438 on Tuesday, while the average of daily deaths went from 47 to 42.

UNITED NATIONS — The top U.N. official for Libya says the coronavirus pandemic “appears to be spiraling out of control” in the conflict-torn north African country.

Acting special representative Stephanie Williams told the U.N. Security Council the number of confirmed coronavirus cases “has more than doubled in the last two weeks, with 15,156 cases and 250 recorded deaths as at Sept. 1.”

She says the country is at “a critical juncture” and community transmission has been reported in Libya’s main cities, including Tripoli and Sebha.

Williams says constraints in dealing with the coronavirus include a shortage of medical supplies, workers and funding.

LITTLE ROCK, Ark. — Arkansas reported its largest single-day increase in deaths from the illness caused by the coronavirus on Wednesday.

The Department of Health reported 27 new deaths from COVID-19, bringing the state’s total fatalities since the pandemic began to 841. Thirteen of the new deaths were late reports, with one of them dating back to May.

OKLAHOMA CITY — A face mask requirement in Oklahoma City has been extended by six weeks to slow the spread of the coronavirus.

The City Council voted to extend the mandate for masks worn indoors until Oct. 20. Oklahoma City had a reported 11,222 total virus cases as of Tuesday, the highest among cities in the state, according to the Oklahoma State Department of Health.

NEW YORK — Gyms in New York City can start reopening with a slew of virus-related restrictions, the latest step in a phased reopening.

Gym members must wear a mask and stay 6 feet apart. Gyms can only operate at one-third capacity and group fitness classes are not permitted.

Gyms in other parts of the state opened at restricted capacity on Aug. 24. New York City officials delayed the reopening until Sept. 2 so the health department could conduct safety inspections by video.

Indoor restaurant dining is still prohibited in the city. That’s resulted in more outdoor dining and extended fence-protected dining into the street.

WICHITA, Kan. — The state’s largest school district in Wichita has overturned its decision to call off all fall sports and activities because of the coronavirus.

The Board of Education for the 50,000-student district reversed itself Tuesday after members were flooded with emails and phone calls that sports be held.

District schools will compete against each other during the regular season but would remain eligible for postseason play. Some of the state’s other large districts called off fall sports, including Shawnee Mission and Kansas City, Kansas. The Lawrence district is allowing sports and re-evaluate on Sept. 10.

Health officials reported 12 deaths for a statewide confirmed toll of 458.

ANKARA, Turkey — Turkey’s health ministry says the country is experiencing the second peak of the first wave of the coronavirus outbreak and blamed gatherings at weddings and holidays.

Health minister Fahrettin Koca says the government has been advised to consider expanding restrictions imposed on social gatherings such as weddings, engagement parties and henna nights in more than a dozen provinces to the entire country.

The minister says nearly 30,000 health sectors workers have contracted the virus since the outbreak and 52 have died.

Koca says the capital Ankara has the highest active coronavirus cases, overtaking Istanbul. More than 273,000 people have tested positive for the virus in Turkey since March, including 1,596 in the last 24 hours.

Another 45 have died in the last day, bringing the confirmed total to 6,462.

His press office says he’s currently isolated in his Arcore residence, near Milan. He’ll continue to work from there as he completes the necessary quarantine period.

The three-time-premier and media tycoon had been recently pictured with his friend and businessman Flavio Briatore, who was recently hospitalized after testing positive for the coronavirus last month. The 83-year-old Berlusconi had tested negative at the time.

ROME — Italy registered a new surge in coronavirus infections, which rose by 1,326 on Wednesday.

That’s up from 978 a day before, according to the latest Health Ministry figures.

The data confirm the rising trend in new cases observed in the country over the past month, but also reflect the wider number of swab tests performed daily, which for the first time topped the 100,000 level. The testing reached almost 103,000 in the past 24 hours.

Health experts are encouraging Italy to boost testing and tracing of contacts of the newly infected before schools open on Sept. 14.

That brings the total number of recorded infections to 71,540 and 387 confirmed deaths. Students are returning to schools across the country for in-person instruction and tourists are trickling back to the skyscraper-studded city of Dubai.

The steadily rising infections have some concerned that authorities could reinstate lockdowns in parts of the country.

YANGON, Myanmar — Parts of Myanmar’s largest city, Yangon, returned to lockdown on Wednesday, after an increase in cases of the coronavirus.

Authorities imposed a stay-at-home order on seven townships and set up checkpoints to prevent entry. The order exempts those working for government organizations and people working in companies, factories and workshops.

Only one person from a family is allowed out shopping, while a maximum of two people are permitted to go for medical treatment. Authorities say offenders will face legal action.

Myanmar has seen a recent rise in confirmed cases of coronavirus, with most occurring in Rakhine State, where a lockdown and curfew were imposed last week.

There have been 163 new cases reported since Monday nationwide, bringing the total to 938 and six deaths.

BRUSSELS — The head of the European Centre for Disease Prevention and Control says the coronavirus doesn’t seem to be spreading significantly in schools that opened early in Europe.

Many students returned to classrooms around Europe this week, but some partly opened before the end of June. A few countries, such as Germany, opened their doors for the new school year in August.

ECDC director Andrea Ammon told EU lawmakers Wednesday that anti-virus measures like social-distancing, hand washing, avoiding mass gatherings and the confinement of suspect cases among students and staff should be enough to limit the spread of the disease. She made no mention of wearing masks.

Ammon says, “closing the schools should be really the last measure that you take.”

Belgium has one of the highest per capita death rates in the world from the coronavirus. Nearly 10,000 people have died in a country of 11.5 million. Belgium has 85,393 cases, according to the ECDC.

JOHANNESBURG — The United Nations refugee agency says Uganda’s government has locked down a refugee camp of more than 100,000 people after an outbreak of the coronavirus.

The lockdown imposed a week ago on the Kyangwali settlement comes amid growing concerns about infections in vulnerable refugee camps around the world. A U.N. refugee agency spokeswoman says Kyangwali has had 24 confirmed virus cases, including one death.

Uganda hosts one of the world’s largest number of refugees. At least 89 refugees in camps across the East African country have tested positive for the virus. Uganda has had a total of more than 3,000 confirmed virus cases.

LONDON — British Prime Minister Boris Johnson is resisting calls to extend a government program that has paid the wages of millions of workers laid off during the coronavirus lockdown.

Since April, the government has paid 80% of the salaries of furloughed employees. The program has supported almost 10 million workers but is due to end on Oct. 31.

Opposition parties have called for its extention. Scottish National Party lawmaker Ian Blackford says failing to do so would bring “levels of unemployment last seen under (Prime Minister Margaret) Thatcher in the early 1980s.”

Answering questions in the House of Commons, Johnson says the government had spent 40 billion pounds ($ 53 billion) on the program but continuing it indefinitely would keep workers “in suspended animation.”

Johnson says, “indefinite furlough is just not the answer.” He says the government was helping people with other programs, including a “Kickstart scheme” that will subsidize companies to hire young people.

LANSING, Mich. — A task force says Michigan should modify a system in which nursing home residents infected with the coronavirus can be treated and isolated in those facilities.

The group was created by Gov. Gretchen Whitmer to prepare for a potential second surge of the coronavirus. Nursing home residents account for 31% of Michigan’s confirmed or probable deaths related to the virus.

Of the 28 recommendations, nearly half involve ways to improve the quality of life inside homes that had to stop communal dining and restrict visits. The panel urged allowing outdoor and window visits, limited communal dining and optional “pod”-like arrangements where residents could spend time together in small groups.

Other recommendations include prioritizing nursing homes for personal protective equipment and testing supplies, lessening data-reporting requirements and designating labs that give priority to specimens from the homes.

Thirteen Republican legislators and a group of businesses contended the Democratic governor abused his power and interfered with the legislative process when he closed schools, issued a mask mandate and limited businesses’ operations.

District Court Judge Thomas Gilligan upheld the governor’s actions Tuesday. A group called Free Minnesota Small Business Coalition argued the governor is usurping the powers of the Legislature. The Walz administration and DFL legislators have maintained that an emergency declaration is necessary to deal with the pandemic.

MADRID — Thousands of Spanish teachers and auxiliary staff are standing in long lines in the street in Madrid after being told to take a coronavirus test just days before the start of classes.

Labor groups say some 100,000 teachers were informed less than 24 hours beforehand about five locations in the city where they had to take the coronavirus tests. The tests are mandatory for school employees.

The tests are taking place between Wednesday and next Monday. School re-openings are staggered, with preschool starting Thursday. Older children go back next week.

The Madrid region is a coronavirus hot spot, with almost 32,000 new cases officially recorded in the past two weeks.